Our newsletter is full of the latest news in practice management

Why Patients Say the Dreaded Four Words: "I'll think about it"

Brett Churnin, November 2017 - Depending on the type of practice you run, you probably see about 15 patients every day. That’s 15 conversations about next steps and potential treatment options; which means 15 opportunities for you (or your front desk coordinator) to hear those four dreaded words: “I’ll think about it”.

At first, it can sound encouraging. They’re going to think about it, and then hopefully they’ll call back later and say, “book me in!”. And sometimes that does happen. Some patients really do need to go away and speak to their partner, or take some time to consider the pros and cons of the options they’ve been given so they can make an informed and powerful decision.

Most of the time, deep down, you know what “I’ll think about it” really means. You know it’s a red herring given by patients so they can sneak out the door of your practice without committing any money or time towards treatment. You know it basically means “thanks, but no thanks”.

The question is: WHY do patients say, “I’ll think about it”? Well, it depends on who’s saying it.

If it’s a new patient who has just met you for the first time, it generally means one of two things:

If it’s an existing patient, believe it or not, it means that they DO like and trust you, and don’t want to hurt your feelings; and that’s a good thing. It also means they don’t want things to be awkward the next time you see each other; and that’s good too.

Yet for these patients, something is still missing. And that could be:

They don’t yet own the problem or the consequences of that problem.

You haven’t created a space for the patient to comfortably say “no thanks, I think I’ll leave it for now”.

In the Primespeak approach, we see the classic “I’ll think about it” response as a form of “polite evasion”. Most of the time, they’re really not thinking about it, not for a moment.

They have simply avoided making a commitment to something that they’re not yet ready to commit to. And they’re saying it because it’s far less confronting to say, “I’ll think about it” than it is to say “I don’t trust you” or “you’re trying to push me into treatment that I don’t think I need”.

So the next time you hear a patient say “I’ll think about it”, consider it an opportunity to keep developing your communication skills. If you’re lucky enough to see the patient again, you’ve got a chance to build more trust and rapport; and a chance to educate the patients in a different way, raising their awareness of and concern for the damaging results of the existing conditions.

By doing this, you give control back to the patient, empowering them to make a truly informed decision. Sitting on the fence is the uncomfortable part – help your patients to make an informed YES or an informed NO, and everyone will feel more at ease.

Find out why good patient communication is so important here. 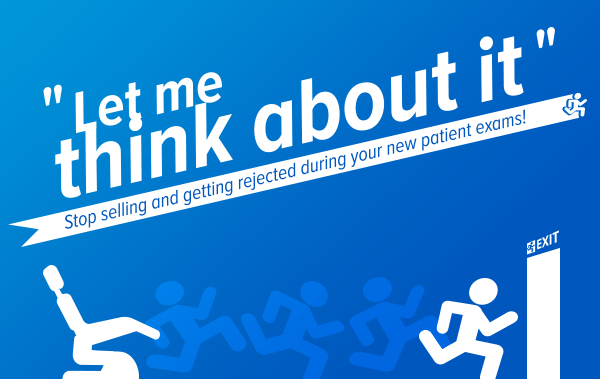 Find out more about Primespeak here.

If you enjoyed this article, you might enjoy the following articles too:

A quick overview of the next few workshops we'll be hosting.

As the world-wide leader in practice management services, we make a promise to you to deliver high quality products and services at all times.

Prime Practice has been a leader in dental practice management since 1995. Based in Australia, Prime is a dental consultancy with clients all over the world. We pride ourselves on our unique product content, our innovative technologies and the knowledge and skills of our business coaches.